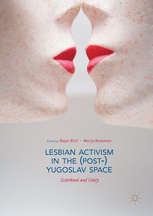 Lesbian Activism in the (Post-)Yugoslav Space

Bojan Bilic, Fellow of the Portuguese Foundation for Science and Technology, Portugal

This book intertwines academic and activist voices to engage with more than three decades of lesbian activism in the Yugoslav space. The empirically rich contributions uncover a range of lesbian initiatives and the fundamental, but rarely acknowledged, role that lesbian alliances have played in articulating a feminist response to the upsurge of nationalism, widespread violence against women, and high levels of lesbophobia and homophobia in all of the post-Yugoslav states. By offering a distinctly intergenerational and transnational perspective, this collection does not only shed new light on a severely marginalised group of people, but constitutes a pioneering effort in accounting for the intricacies – solidarities, joys, and tensions – of lesbian activist organising in a post-conflict and post-socialist environment. With a plethora of authorial standpoints and innovative methodological approaches, the volume challenges the systematic absence of (post-)Yugoslav lesbian activist enterprises from recent social science scholarship.

Lesbian Activism in the (Post-)Yugoslav Space will be of interest to students and scholars across a range of disciplines, including gender studies, history, politics, anthropology, and sociology.

Marija Radoman is a researcher and teaching assistant in the Department of Sociology, Faculty of Philosophy, University of Belgrade, Serbia.

RSVP by February 21 at goblg@ceu.edu