May 2022: Online Workshop series on anti-gender politics and pedagogies of populism in Central and Eastern Europe 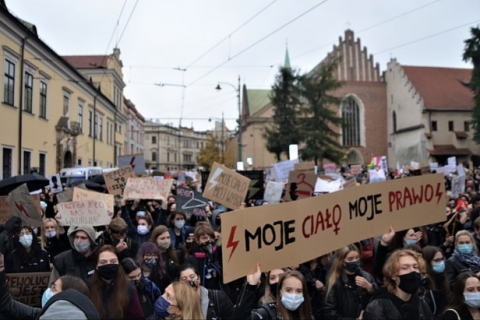 In recent years, social movements and political campaigns challenging women’s rights and LGBTQ+ equality have mobilized publics across the globe, from West Africa to Central and Eastern Europe, South Asia to North America. Even as some countries have witnessed an expansion of reproductive rights, marriage equality, and the legal recognition of transgender people, in many others these rights have been substantially weakened, diminished, or outright withdrawn. As commentators and academics have explored, “anti-gender” and “anti-LGBTQ+” movements often reach beyond national borders and draw upon shared strategic and material resources. Rather than consider such movements as independent national(ist) “backlashes,” this series of workshops seeks to explore their connections historically and geographically, as regional expressions of a well-connected and well-funded conservative coalition. And yet, these campaigns are not monolithic; while their actors may share similar goals, considerable differences can be observed in their political, cultural, and religious backgrounds.

Bringing together leading academics from across the social sciences, this workshop series asks: how did these movements come together, why, and to what extent are they in fact unified? Who are their central actors? Do they share a vision of the past, present, and future? What is their global appeal and why do they seem to be succeeding?

This workshop series takes up these questions from three perspectives -- exploring them historically, transnationally, and pedagogically -- in order to illuminate the development of anti-gender and anti-LGBTQ+ politics and to think collectively about how to teach our present moment. Importantly, this workshop series endeavors to situate such movements, so far largely discussed through regional contexts, within a broader global comparative.

This workshop examines anti-gender and anti-LGBTQ+ movements in Central and Eastern Europe within the broader context of 20th-century political and social developments. Should we understand the contemporary anti-gender and anti-LGBTQ+ movement in the region as a product of late state socialist gender politics, post-socialist anti-imperialist discourses, a conservative reaction to liberalism’s post-2008 crisis, or something else altogether?

Workshop #2. Pedagogies of Populism and Anti-Gender Politics in Central and Eastern Europe

This collaborative discussion raises pedagogical concerns surrounding contemporary anti-gender and anti-LGBTQ+ politics. Programs in gender studies, gender history, and sex education face increasing attacks in Europe and in the United States. How can we as pedagogues, drawing upon our various disciplinary backgrounds, address the rise of anti-gender and anti-LGBTQ+ politics with our students?