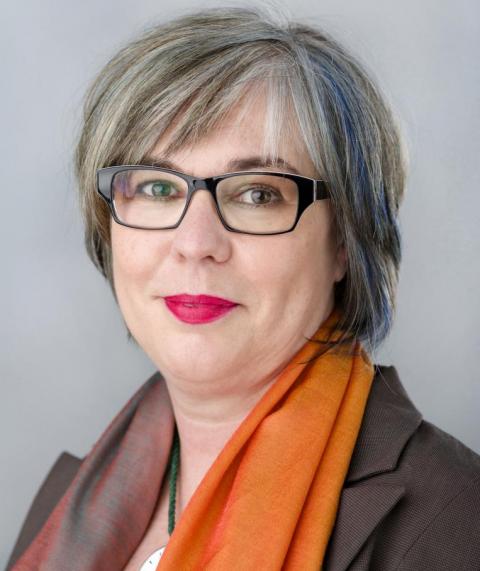 CEU Professor Andrea Pető will be awarded the 2018 All European Academies Madame de Staël Prize for Cultural Values to honor her wide-ranging scholarly work on gender studies and European contemporary history. The Madame de Staël Prize Jury considered her research an exceptional contribution to shed light on Europe's gendered memory of the Second World War, the Holocaust and political extremism. Pető will be the fifth scholar and the first Hungarian to be awarded the Prize, at the initiative of ALLEA, the European Federation of Academies of Sciences and Humanities, with the co-sponsorship of the Italian foundation Compagnia di San Paolo. The €20,000 Prize will be awarded at the ALLEA General Assembly at the Bulgarian Academy of Sciences in Sofia on May 16 and will be presented by the European Commissioner for Digital Economy and Society Mariya Gabriel.

"This award recognizes Professor Pető's contribution to European culture and history," CEU President and Rector Michael Ignatieff said. "On behalf of CEU, I would like to express my deep appreciation to ALLEA for this honor and to Professor Pető for her dedication to topics essential to our understanding of war, genocide, political movements, and European history."

The Prize was established to commemorate that, despite variations in definition and geographical boundaries over the centuries, there has always been a deep-rooted understanding of European culture as connected by an inherent diversity supported by a dynamic and vigorous intellectualism.

"This year the Madame de Staël Prize Jury honors not only a celebrated and prolific scholar in East and Central European contemporary history, but also underlines the intellectual originality of Pető's approach to investigate the intricacies of remembrance in Europe's most conflictive history from a gender perspective," said Professor Gunter Stock, ALLEA President and chairman of the Prize jury.

Pető is a professor in CEU's Department of Gender Studies and a Doctor of Science of the Hungarian Academy of Sciences (HAS). She is a member of the HAS's Committee on History, and voting member of the Women in Scientific Careers Presidential Committee, established in 2017. Most recently she analyzed the status, role and opportunities of women in science during the 2017 Celebration of Hungarian Science.

She is the author of five monographs and editor of 31 volumes and 261 articles and chapters in books published in 17 languages. In 2005, she was awarded the Officer's Cross Order of Merit of the Republic of Hungary by the President of the Hungarian Republic and the Bolyai Prize by the Hungarian Academy of Sciences in 2006. Her publications include Geschlecht, Politik und Stalinismus in Ungarn. Eine Biographie von Julia Rajk (2007); Women in Hungarian Politics 1945-1951 (2003); Napasszonyok es Holdkisasszonyok. A mai magyar konzervatív noi politizalas alaktana (2003), Interdisciplinary Handbook Gender: War (2017), Women and Holocaust: New Perspectives and Challenges (2015), co-authored with Louise Hecht and Karolina Krasuska; Gender and Far Right Politics in Europe (2016), co-authored with Michaela Köttig and Renate Bitzan; Gendered Wars, Gendered Memories. Feminist Conversations on War, Genocide and Political Violence (2016), co-authored with Ayse Guul Altınay, and Political Justice in Budapest after World War II, co-authored with Ildiko Barna (2015), among others.

ALLEA established the All European Academies Madame de Staël Prize for Cultural Values to pay tribute to the boundless intellectual, cultural diversity and richness of Europe, and to highlight how remarkable scholarly work, particularly in the fields of the humanities and social sciences, contributes to the understanding of Europe as a cultural and intellectual entity. The Prize is awarded to eminent scholars whose work represents a significant contribution to these objectives. The first laureate, Professor Luisa Passerini, received the Prize in 2014 to honor her far-reaching research on European cultural identity. In 2015, Professor Dame Helen Wallace was honored for an academic career devoted to bridge the research and policy gap in Europe. In 2016, Professor Remi Brague was the third scholar to be honored for his comprehensive understanding of the relationship between Judaism, Christianity and Islam. In 2017, the President of the Court of Justice of the European Union and Professor of European Law at the University of Leuven, Koen Lenaerts, received the Prize for his extensive scholarly work on European law and his reflections on European jurisdiction.

For further information about the Prize and the award ceremony, click here and here.