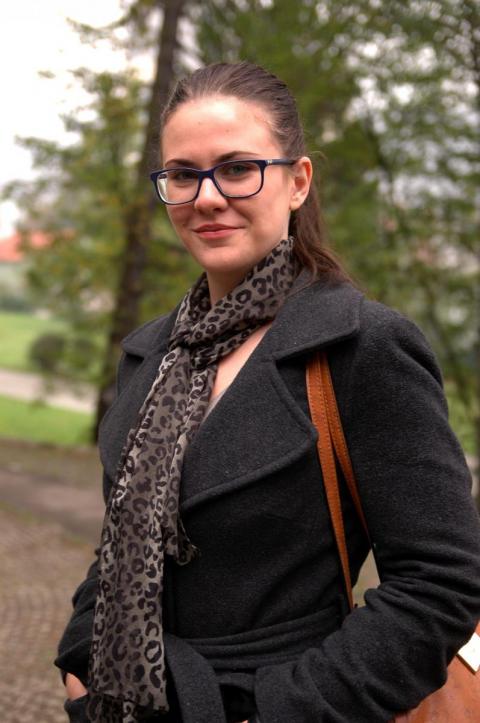 Edita Miftari (1989), from Bosnia and Herzegovina is a Fulbright Visiting Researcher at Clark University. She received her Bachelor's degree in Security Studies from Sarajevo University and M.A. in Gender Studies from Central European University in Budapest in 2014. Her research focuses on women's political participation, inclusive peace and security processes, and her work is closely related to Sarajevo Open Center, an NGO that has contributed to significant positive changes in the area of women's and LGBT human rights in Bosnia and Herzegovina. Edita is a member of Women's Network of BiH, Women's Initiative for Constitutional Reforms, Women in Business Network and Peace Building Network, and has been awarded with numerous academic and professional scholarships, including fellowships of the Central European University (2013), School of Political Studies of the Council of Europe (2013), German Marshall Fund of the United States (2014), Foreign and Commonwealth Office of the United Kingdom and the Queen Mary University of London (2015) and the U.S. Department of State's Fulbright fellowship (2015). In 2015, Edita has co-authored a book on women's political history in post-conflict Bosnia and Herzegovina.

"Coming from the post-war educational system in Bosnia and Herzegovina that hasn't fully embraced reforms in this area, the overall experience at the CEU and the Department of Gender Studies was insightful and useful to Edita for many different reasons, especially because of its interdisciplinary approach to the field of study, focus being on critical thinking and academic writing as opposed to the rote learning system at her previous education in Bosnia and Herzegovina, having access to latest research, studies and readings in general, student-centered approach and having access to both faculty and administrative staff who were always very friendly and supportive, networking opportunities at the events and meetings organized by the Department, multi-professional and multi-academic background of the student body, living and studying in a diverse environment, and many other reasons. I would always go back to the Department of Gender Studies in any capacity and I wholeheartedly recommend it to anyone interested in deeper exploration of gender relations in any area of life."

Since she graduated from CEU in 2014, Edita has produced two major studies on gender equality and political participation of women in Bosnia and Herzegovina, and co-authored a first comprehensive annual report on women's human rights in Bosnia and Herzegovina and a documentary book on women in politics in Bosnia and Herzegovina since the Dayton Peace Agreement in 1995. All of these and other projects were implemented in collaboration with Sarajevo Open Center, an NGO based in the capital of Bosnia and Herzegovina. Edita is currently a Fulbright Visiting Researcher in the Political Science Department at the Clark University in Worcester, Massachusetts (United States). Her research at Clark is related to political participation of women in post-conflict societies, especially in terms of exclusion of women from peace negotiations and its effects to post conflict gender equality or lack of it. Her Fulbright experience has provided her with an opportunity to work closely with Professor Kristen Williams, her academic supervisor, as well as with Professor Cynthia Enloe and Professor Valerie Sperling, all of them renowned feminist scholars in gendered politics, international relations, militarized culture and so on.